MSgt Greene was born and raised in Orlando, Florida.  He entered the US Air Force, Sep 7, 1979, and went to Basic Military Training at Lackland AFB, San Anotonio, TX..  He became a USAF Combat Survival Instructor, "SERE"(Survival, Evasion, Resistance and Escape.)  His first assignment was at the US Air Force Global Survival Training Facility, 3636th Combat Crew Training Wing, at Fairchild AFB, in Spokane, Washington.  As an Instructor, he trained Aircrew members how to Survive, in any environment.
He was was assigned in 1982, to the USAF Water Survival School, at Homestead AFB, FL, in South Miami.  As an Instructor for the Water Survival School, he was selected to attend Army Airborne Training at Fort Benning, GA.  This helped him to be selected to be a certified JumpMaster for the Training Squadron.  During his Career, he had 79 Parachute Jumps.
In 1985, He was assigned to the 96th Bomb Wing, Dyess AFB, Abilene, Texas.  He trained B1 Bomber Pilots in Nuclear/Biological Survival.
In 1991, He was assigned to the 437th Airlift Wing, Charleston AFB, South Carolina.  He ran the largest Combat Survival Training Program in the USAF.  In 1992, He became an Instructor at the USAF Airman Leadership School.
In 1995, MSgt Greene became a USAF Recruiter, Tallahassee, FL.
He Retired from the USAF in April 2000.
He became a USAF Junior ROTC Instructor in July 2002, teaching for 3 years at Mitchel-Baker High School in Camilla, GA.
He opened this new unit, GA-20051, East Paulding High School, in July 2005.
In 2016 he was awarded "The USAF JROTC Instructor Of The Year" for the entire Nation.
He has been married to his wife "Becky" for over 37 years.  He has 3 Children, and 7 Grandchildren. 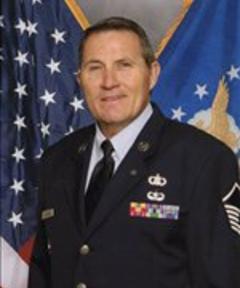